In 1923 the Frenchman Charles Mochet builds a pedal propelled cart for his son George, as his wife thinks a bicycle is too dangerous. George soon finds out that his “Velocar” makes him faster than his friends on bicycles.

It turns out that while cars are absolutely unaffordable for the ordinary man, there is a demand for the Velocar for grownups. Mochet starts producing Velocars.

Mochet recognizes that the higher speed is a result of the lower air resistance. He performs some simple but ingenious test to prove this. To overcome a main disadvantage of the Velocar (not being able to corner fast without falling over) he builds a tricycle. This turns out to be no improvement. Finally he makes a two-wheel version. A recumbent. It is also named Velocar but is more generally referred to as “Velo horizontal”(horizontal bike)

With this recumbent –the thus far not outstanding– cyclist Françis Faure breaks record after record in 1933. In races Françis Faure is virtually unbeatable.

On June 7 1933 Françis also breaks the prestigious world record. He sets the record at 45,055 km. The record stood at 44,247 km. There is a commotion in the UCI (Union Cycliste Internationale).
To complicate things Maurice Richaud also brakes the old record with 44,777 km on a ordinary bicycle. 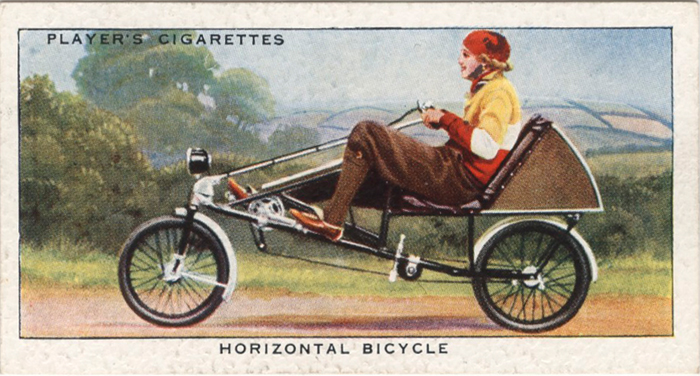 The recumbent is in full compliance with the UCI regulations and with those of the UVF (Union Vélocipédique de France). But there are just too many vested interests (producers and racers) that want to stop further development of the bicycle.

On February 3 1934, after a long and tumultuous meeting the UCI decides to change the rules in such a manner that all recumbents are excluded from races and records.

50 years of no progress

This brings the development of the recumbent to a halt. It will remain silent until some fifty years later the oil crises emerges. This sparks renewed interest for efficient means of transport.

The wonderful “Velorama” bicycle museum in Nijmegen, Holland (see link page) has a specimen of the Velocar, as is was built for daily use.
Wandering through this museum it is striking just how innovative the engineers and inventors were in the early days of cycling. And that nothing substantial has changed about upright bikes since 1933. 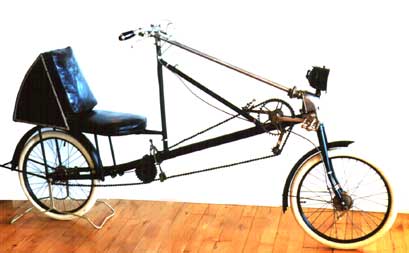 With special thanks to the Dutch Velorama museum (see Link page)